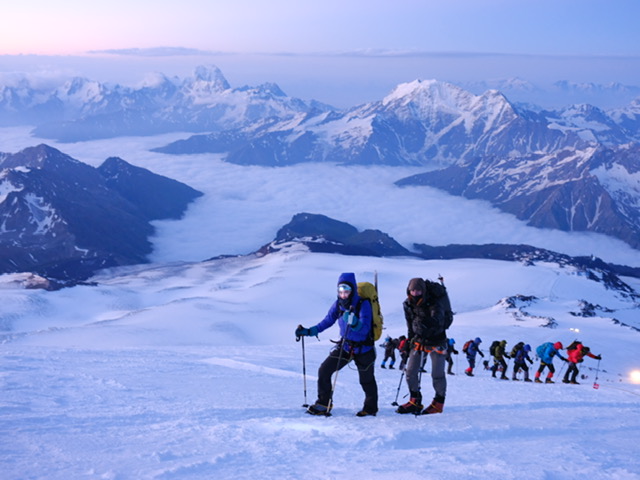 I recently returned from two weeks abroad in Russia, I did the usual sightseeing, but my main objective was to climb the highest peak in Europe, Mount Elbrus, which happens to be in Southern Russia. This is the fourth of the seven highest peaks on each continent I’ve had the opportunity to climb. What I find most interesting about climbing these peaks is their international allure. The base camps of these peaks are always international melting pots, people from all over the world travel to these remote areas with the same goal in mind.

On the mountain, political and geographic borders are of little importance to the participants. Individuals across cultures, languages, and borders interact freely and peacefully with almost no central controlling hand dictating the rules. One could argue these wild and remote places become — as Rothbard might call them — temporary nations of consent.

The individuals who had come to this mountain to trade and work together were not all the same, of course. We all came form different groups and different places. We were all part of different nations.

Many often tend to conflate the idea of the nation and the state. However, as Rothbard so eloquently identified in his essay “Nations by Consent:”

The “nation” … is not the same thing as the state, a difference that earlier libertarians and classical liberals such as Ludwig von Mises and Albert Jay Nock understood full well. Contemporary libertarians often assume, mistakenly, that individuals are bound to each other only by the nexus of market exchange. They forget that everyone is necessarily born into a family, a language, and a culture. Every person is born into one or several overlapping communities, usually including an ethnic group, with specific values, cultures, religious beliefs, and traditions. He is generally born into a “country.” He is always born into a specific historical context of time and place, meaning neighborhood and land area.

This was clear even in our little base camp on the mountain. And after several days on the mountain, we reached the summit and were greeted with a display of world flags. But it wasn’t France or Mexico that climbed Elbrus, it was the work of one individual cooperating with many other individuals across many geographic borders. Did the climbers who left behind these flags to salute the governments under which they lived? Or were they taking pride in their national origins? It was most likely the latter. In fact, disapproval of the state was obvious from many conversations on the mountain. None of us on that mountain wanted to be defined by the actions of our governments. Conversations regarding the actions of our governments were always dismissed with disapproval from both parties. Without communicating it verbally we all understood it was not important to our individual relationships.

This was especially significant, given that we were in Russia. But it was understood among the climbers that the tension being manufactured between Russia and the United States was mostly due to the agendas of an elite few within each state. This tension was recognized to be far removed from the individuals that just want to cooperate with one another — or in this case, climb a mountain together.

But even as we recognized we were being ill-served by our respective governments, nearly every climber still had pride in his or her nation.

As Libertarians we must respect and understand this distinction — we cannot depersonalize the importance of culture, land, and language in the stateless society. The work that needs to be done is a fundamental understanding of the separation of the nation and state.

In fact, the more the nation is identified as an important aspect of human society — and as something in conflict with the idea of the state — the better we may understand how the idea of “nations of consent” illustrate Rothbard’s words:

In sum, if we proceed with the decomposition and decentralization of the modern centralizing and coercive nation-state, deconstructing that state into constituent nationalities and neighborhoods, we shall at one and the same time reduce the scope of government power, the scope and importance of voting and the extent of social conflict. The scope of private contract, and of voluntary consent, will be enhanced, and the brutal and repressive state will be gradually dissolved into a harmonious and increasingly prosperous social order.